Organization of alcohol testing at the enterprise

Despite the global trends in increasing costs for measures to improve the safety of industrial enterprises, the introduction of alcohol testing is still the kind of cost that many enterprises are trying to do without. Alcohol testing, if introduced, is not directly involved in the production process, and, therefore, does not make a profit. Therefore, an assessment of the economic efficiency of such measures is needed primarily by the heads of labor protection units to justify the financial costs of purchasing and installing alcohol testing equipment. How much can the absence of such a system in an enterprise cost in today's realities? Let's figure it out.

The coronavirus spring of 2020, which suddenly hit all industries, staff cuts and, as a result, an increase in the workload of the remaining employees, economic instability and pessimistic forecasts will add new reasons for employees of enterprises to deal with stress and fatigue with the help of alcohol. Individual employees will deal with stress and fatigue before and some during work. So, according to retail chains, the growth in demand for alcoholic beverages in March 2020 amounted to 15% compared to the same period in 2019. 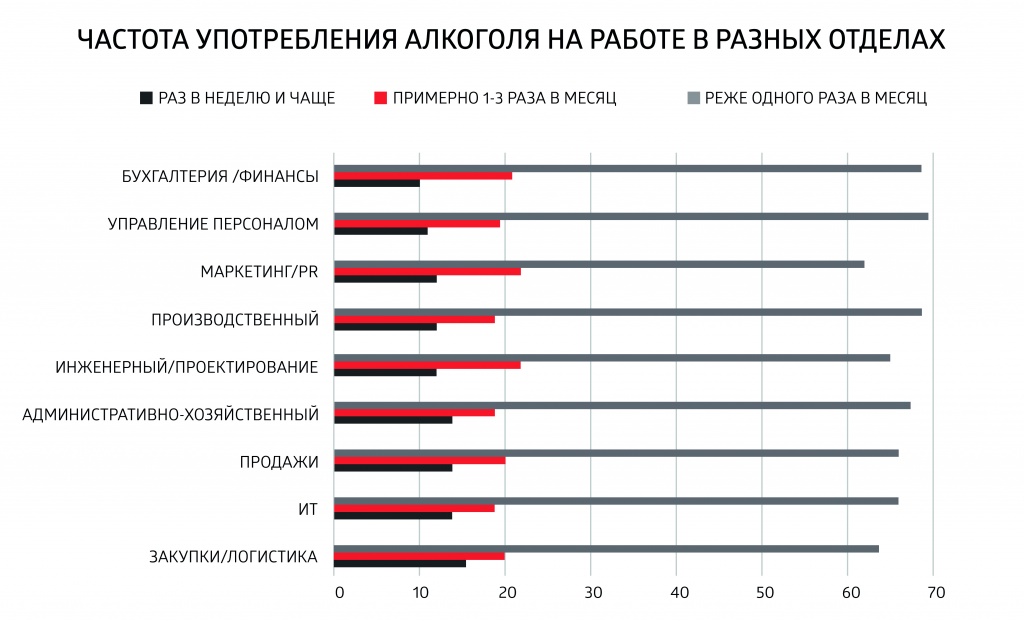 Alcohol testing is one of the most effective ways to prevent an employee under the influence of alcohol from entering the workplace. It is possible to assess the effect of the introduction of alcohol testing using the theory of assessing the economic efficiency of labor protection measures. Most often, the effect of the implementation of labor protection measures is assessed according to the Finnish "Balloon Model", the idea of ​​which is to compare the costs and benefits of the implementation of one or another measure. In practice, such an assessment is most often carried out according to the criterion of increasing (maximizing) the prevented damage. One of the elements of the successful implementation of such a criterion is the reduction of industrial injuries and accidents, as well as the financial costs caused by them.

To form the assessment criteria, we will consider the structure of economic damage from an accident at a production facility that occurred through the fault of an employee in a state of alcoholic intoxication. At the same time, let us estimate the cost of an industrial accident on the part of the enterprise (Figure 2). 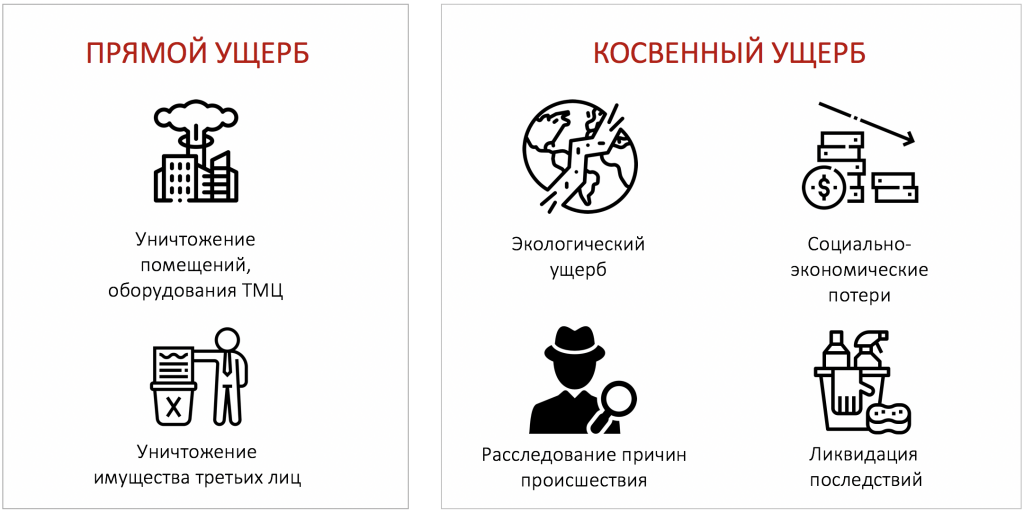 To assess in monetary terms each of the elements of damage, let us consider a case (a real case from Rostekhnadzor statistics is taken as a technical basis).

“On July 15, 2019, at about 19:00, the driver (male, 34 years old) of the boiler plant, being intoxicated, stopped the operating (main) boiler No. 1 and, in the absence of coolant (water) in the boiler No. 2, started the latter. At about 19:20, while the running boiler was actually in an overheated state, the driver opened the valve for supplying cold water to the boiler, as a result of which there was an instantaneous transformation of water into steam with an increase in pressure (water hammer), which resulted in the separation of the boiler from the heat pipelines. network, its subsequent displacement from the installation site and a blow to the driver, as a result of which he received injuries incompatible with life. Also in the course of the incident, two people were injured (one - from among the personnel aged 48 years, one - the third person conducting the audit). A forensic chemical study found ethyl alcohol in the driver's blood at a concentration of 1.6 ‰, which corresponds to an average degree of alcoholic intoxication. Remained a wife and two children (8 and 10 years old). "

The structure of economic damage in this case is presented in Table 1.


In addition to compensation for lost earnings, victims or their relatives have the right to file a claim for compensation for moral damage. In some cases, based on the results of court decisions, the amount of compensation reaches 1,000,000 rubles. The total amount of economic damage in the considered example does not include the costs of penalties and fines, reputational and environmental damage, losses of third parties, which in certain industries can reach hundreds of thousands, and sometimes even millions of rubles.

Some employers mistakenly believe that if an employee appears at the workplace while intoxicated, then the employee will pay all the damage caused. And if an employee is injured, being not completely sober, then this is definitely not the employer's problem, but the employee's own problem. Everything is not so simple. Analyzing individual court decisions, one can see a rather interesting trend: a large number of decisions of arbitration courts do not connect the state of alcoholic intoxication and the fact of injury, appealing with the requirement to prove the causal relationship between the injury and the state of alcoholic intoxication. A causal relationship is established on the basis of a medical examination, which in most cases determines almost any type of injury (except for the actual state of toxic intoxication) as a consequence, for example, of a hit on a hard surface, or a fall from a height, or an electric shock, but not as a consequence direct intoxication. By removing the responsibility for the accident from the employee in a state of alcoholic intoxication.

Quite often, business owners do not take into account another type of responsibility - this is the legislative responsibility for allowing an employee intoxicated to work (Figure 3). 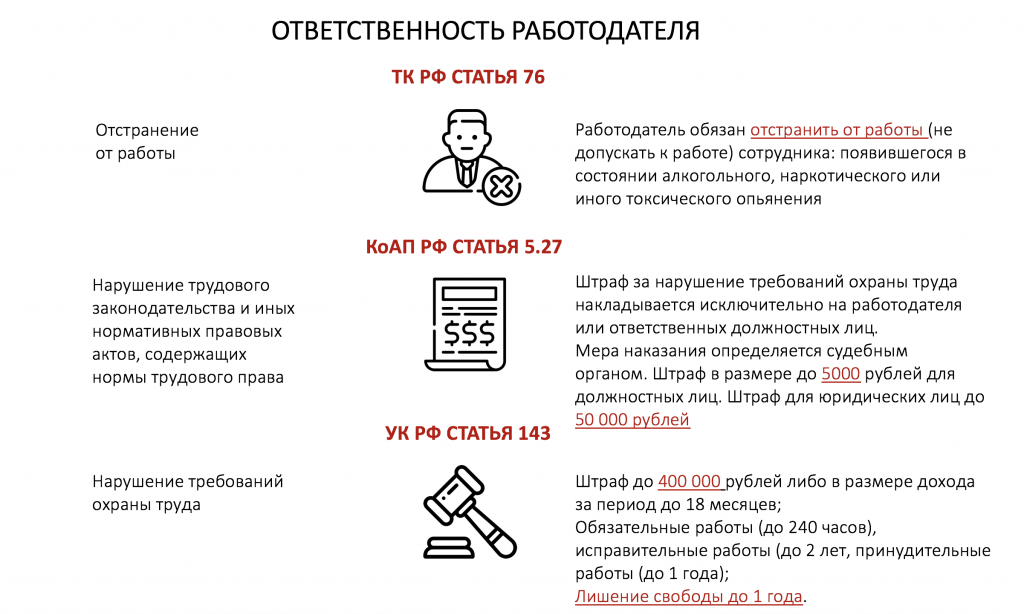 Thus, the amount of damage, depending on the severity of the consequences of an industrial accident or injury, may increase by several hundred thousand rubles. And in especially severe cases, the business owner may be deprived of his freedom.

Many business owners will certainly find their production different from the employee in the example above. In most large modern manufacturing plants today, it seems that employees don't need to drink alcohol in the workplace. But there are exceptions here too. For example, according to the German newspaper "Bild" on March 3, 2017 at the BMW plant in Munich, a car assembly line was stopped. The reason for such a large enterprise is more than shocking: two employees behaved inappropriately, which required an ambulance to be called. The doctors who arrived at the call found alcohol in the blood of two colleagues. The work of the plant for the first time in its history was stopped for 40 minutes. As a result, the concern suffered a loss of almost 1 million euros.

The breathalyzer market is currently represented by a large number of models from different manufacturers. At the same time, depending on individual technical characteristics, design and functionality, the cost of one device can vary from tens of thousands of rubles to 1 million or more rubles. The main characteristic of the breathalyzer is the measured concentration of ethanol vapors in the exhaled air, which differs slightly in the existing models. Therefore, the main evaluated criterion for the consumer most often becomes the cost of the device. However, when deciding to purchase a particular model, one should pay attention not only to the market value of the device and the range of estimated ethanol concentrations, but also to other parameters that can add hidden costs in operation, in some cases, several times higher than the cost of the device itself:

With a thorough study of all costs, it may turn out that a device for a lower cost in operation will cost more than a device of a higher cost. In addition, the functionality of individual devices allows for continuous autonomous operation 24/7, which will also reduce the cost of operating the device.

As a conclusion, it should be noted that the introduction of alcohol testing is a cost-effective element of labor protection measures. But for its successful implementation, first of all, a competent and objective selection of a breathalyzer is required. And given the increasing role of safety assurance during breathalyzer testing, when choosing a breathalyzer, such characteristics as the speed of the device come to the fore (a short measurement cycle allows not only checking more employees per unit of time, but also preventing crowds of people at the checkpoints of enterprises during rush hours), non-contact measurement , the possibility of sampling through the mask, as well as the possibility of quick disinfection. Only in this case, breathalyzer testing will bring maximum benefit.